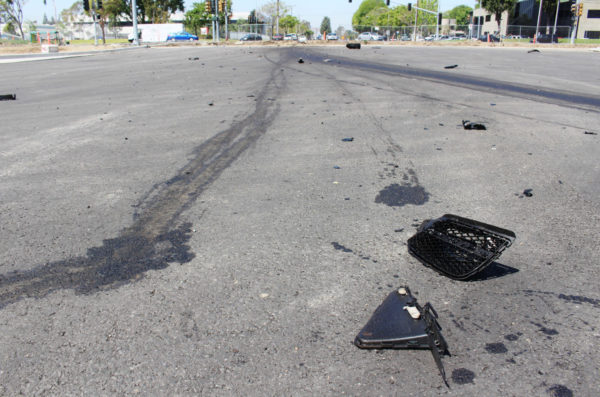 The federal judge was walking on the sidewalk near the intersection of North Ocean Boulevard just north of Spanish River Park on Friday morning when Nastasia Snape who was driving a red two-door sedan mounted the curb and ran over the judge and a 6-year-old boy.

Both were rushed to the hospital where Judge Feuerstein was pronounced dead. The 6-year-old boy whose name has not been released was treated for serious but non-life-threatening injuries and will make a full recovery.

Snape, also the name of a character in the J.K. Rowling book series Harry Potter, was described as driving erratically moments before the accident. At the time of the accident, she attempted to drive around stopped traffic by mounting the curb which is where she struck and killed judge Feuerstein.

After the accident, Snape fled the scene and was apprehended after the second accident in Delray five miles north of the first accident, at the intersection of Southeast 10th Street and Southeast Sixth Avenue.

When approached by police she began to convulse and behave like she was having a seizure and police describe her as not “moving around as the typical person would be who had just been involved in a crash.”

She then began to fight with medics and scream. She states that she was ‘Harry Potter’. At a later point, she did not remember being in an accident.

Judge Feuerstein was born in 1946 in New York. She later attended the University of Vermont and earned her JD at Yeshiva University in 1979.

In 2003, former President George W. Bush nominated her to serve in a seat on the U.S. District Court for the Eastern District of New York. Before that, Feuerstein was a Nassau County District Court judge and was elected to the state Supreme Court in 1994. She will be missed.

If you or a loved one have been involved in a car accident, speak to one of our West Plam Beach car accident lawyers as soon as possible.

For a client who suffered a neck injury in a car accident and endured pain and suffering that affected her ability to work and to play with her grandchildren… Steinger, Greene & Feiner Wins $1.37 Million for Client Who Suffered Neck Injury In Car Accident Steinger, Greene & Feiner firm partner Neil Anthony and attorney Concetta Camacho are a powerhouse END_OF_DOCUMENT_TOKEN_TO_BE_REPLACED

For a group of men who were injured in a Chipotle Mexican Grille when the chain failed to maintain proper safety standards… $1.35 M Jury Verdict After Slip and Fall at Popular Mexican Grille WEST PALM BEACH – Neil Anthony and Michael Shiver of Steinger, Greene, & Feiner law firm obtained a $1.35 million verdict for a victim END_OF_DOCUMENT_TOKEN_TO_BE_REPLACED