Riding ATVs in and around Nashville is pure fun, but also quite dangerous. All-terrain vehicles (a.k.a. ATVs, four-wheelers, or quad bikes) are often used on trails and other areas where paved roads aren’t present. In some cases, ATVs are also used on side roads, especially in rural areas.

Unfortunately, riding a four-wheeler can lead to serious injuries. Even if you are operating the vehicle safely, factors beyond your control can cause an accident. A hiker may suddenly appear on a trail, or a car might run a stop sign while you’re legally riding your quad bike on the road.

After a wreck, you could be facing serious injuries, leading to medical bills, lost wages, and other losses. If you’ve been involved in a four-wheeler accident, you may be entitled to compensation. Call Steinger, Greene, & Feiner today at (615) 590-3106 or contact us online for a free, no-obligation consultation with a Nashville ATV accident lawyer. 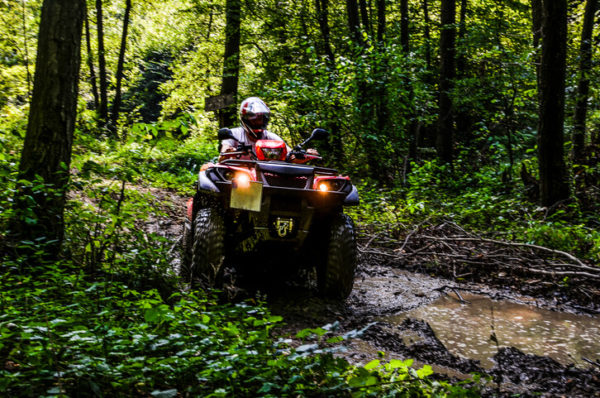 Common Injuries After an ATV Accident in Nashville

According to the U.S. Consumer Product Safety Commission, there were 93,800 ATV-related, emergency department-treated injuries across the country in 2017. Over a quarter of these injuries involved children under 16 years old. In 2017, there were also 295 reported deaths. The most commonly treated body parts included arms (29%), the head and neck (29%), the legs (21%), and the torso (20%).

Arm and leg injuries are the most common after an ATV accident. These injuries may include dislocated joints, broken bones, lacerations, bruises, and more. While some of these injuries may not seem serious, even small cuts can lead to complications like infections.

Most of the time, arm injuries are relatively easy to recover from. However, depending on the severity of the injury, it may result in amputation or other serious treatment.

Head and neck injuries are often the most serious of all. Head injuries can range from mild concussions to brain bleeds. You may need to be hospitalized for your injuries, and could even be in a coma or suffer another serious complication. While helmets do prevent many of these injuries, they don’t prevent every head injury.

Neck injuries can be treatable, but some can also cause complete paralysis. One of the most common neck injuries is whiplash. Whiplash occurs when the muscles, tendons, and/or ligaments are sprained due to the head quickly moving forward then back. You may also damage your vertebrae, which can lead to lifelong conditions like paralysis.

Torso injuries can also range from mild to severe. They include broken ribs, punctured organs, and other injuries. You might also suffer from bruises, cuts, and even internal bleeding. Because it’s difficult to see how serious torso injuries are just by looking, it’s important you seek medical attention as soon as possible.

Cracked ribs can’t really be treated. Instead, they heal on their own. However, a cracked rib could cause a punctured lung or other organ. In addition, what may seem like a simple bruise could be indicative of internal bleeding.

Types of Compensation You May Recover After Your Accident

Compensation is typically divided into two categories: economic and noneconomic. As the name indicates, economic damages deal with the real financial losses suffered because of the ATV accident. This could include property damage, lost wages, medical bills, rehabilitation costs, out-of-pocket expenses, and more.

Noneconomic damages are vaguer because they have nothing to do with money. Instead, they compensate you for the less tangible losses suffered. This could include physical pain, mental suffering, loss of enjoyment in life, physical disfigurement, and more.

Steps to Take After Your ATV Accident

After your ATV accident in Nashville, the most important thing to do is call 911 and get medical attention. As mentioned, you may be dealing with injuries that you aren’t aware of. After all, not all injuries are immediately evident, and adrenaline may cover up any pain you would otherwise feel.

When the police arrive, give an accurate statement of what happened. Don’t offer opinions, speculate, or admit fault. In addition, make sure you accept treatment from EMTs on the scene and follow their advice. This includes going to the emergency room if needed or at least following up with your general practitioner.

Last but not least, you should also call a Nashville ATV accident lawyer as soon as possible. That way, your lawyer can start building a case on your behalf to help you get the compensation you deserve.

Four wheeling accidents can happen for any number of reasons. One of the most common reasons for ATV accidents is uneven ground. When quad bike riders, especially inexperienced ones, take their vehicles on a rough trail, they may drive too fast or turn too quickly for the terrain. This can lead to the ATV flipping over or crashing into a ditch or tree.

Other vehicles on the road can also cause a wreck. Under Tennessee law, off-road vehicles like four-wheelers aren’t allowed on state roads, highways, or roads that connect to these major routes. The only exception is crossing over the highway or using your off-road vehicle for agricultural purposes. If another vehicle causes your wreck, they can be held liable for your injuries and other losses.

In rare cases, the manufacturer of the ATV or its parts can be held liable for your losses. This can be the case if a component of the vehicle malfunctions. While this isn’t a typical cause of ATV accidents, it can cause serious wrecks. For instance, if you’re driving down a hill on a trail, and your brakes suddenly fail, you could hit a tree or go off the trail.

How Common Are ATV Accidents in Nashville?

In 2018, there were a total of 146 reported ATV accidents in Tennessee. These included 93 injury crashes, 18 fatal crashes, and 35 crashes resulting in property damage of at least $400. This was a statistically sharp increase from the 116 ATV accidents that occurred in 2017 throughout the state.

From 2012 to 2014, Tennessee saw an average of 6.8 ATV accidents per 1 million people annually, and a total of 44 deaths over those three years. This means they were the 14th-most dangerous state in the country in terms of ATV fatalities.

Why You Should Hire an ATV Accident Lawyer Right Away

ATV accidents aren’t always taken seriously since these vehicles often travel at lower speeds than other vehicles. But because off-road vehicle operators are less protected than car drivers, they are at a greater risk of being injured in a wreck. This is due in part to Tennessee helmet laws.

Any operator or passenger under 16 has to wear a helmet at all times when they’re on an ATV. Those over 18 don’t have to wear helmets on off-road trails. But on the road, all passengers and operators must wear helmets.

Even if you wear a helmet at all times, there is a great chance you can be in a four-wheeling accident. If you are, we can help you get the compensation you deserve. At Steinger, Greene, & Feiner, we have recovered over $1 BILLION on behalf of our clients. Call us at (615) 590-3106 or contact us online for a free, no-obligation consultation with a Nashville ATV accident lawyer today.

For a client who suffered a neck injury in a car accident and endured pain and suffering that affected her ability to work and to play with her grandchildren… Steinger, Greene & Feiner Wins $1.37 Million for Client Who Suffered Neck Injury In Car Accident Steinger, Greene & Feiner firm partner Neil Anthony and attorney Concetta Camacho are a powerhouse END_OF_DOCUMENT_TOKEN_TO_BE_REPLACED

For a group of men who were injured in a Chipotle Mexican Grille when the chain failed to maintain proper safety standards… $1.35 M Jury Verdict After Slip and Fall at Popular Mexican Grille WEST PALM BEACH – Neil Anthony and Michael Shiver of Steinger, Greene, & Feiner law firm obtained a $1.35 million verdict for a victim END_OF_DOCUMENT_TOKEN_TO_BE_REPLACED